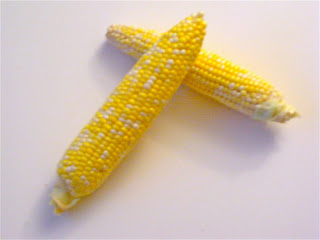 One of my favorite things about American summers is sweet corn. The type of corn we have back in Turkey is much hardier and not sweet, and would be inedible unless you boiled it for a couple of hours. To get our corn fix quickly, we had to wait for one of the Itinerant corn sellers that prowl the streets during summers to pass by our window and run down to fish out an ear or two from the big pots of boiling water they wheel around. American corn, by contrast, cooks in a couple of minutes. In addition to tasting great, corn is good for you: It has plenty of fiber as well as vitamins B and C. Plus, it retails for 40 cents an ear at the farmer's market - you can't really get a cheaper snack than that! Given all these advantages, I thought I'd highlight three of my favorite corn recipes for my first blog post.

Corn, Avocado and Tomato Salad
Recipes for tomato-corn salads are a dime a dozen in cooking magazines during summer. I added an avocado because there are few dishes which are not bettered by the inclusion of an avocado! Despite heavy competition this might just be my favorite salad of all time. The keys to this recipe are to use ripe summer tomatoes, avocados and corn, to season with freshly ground pepper (pre-ground black pepper from the supermarket has no taste compared to freshly-ground. Throw that away, spend a couple more dollars and get some whole peppercorns in a grinder - you'll be surprised at the difference it makes) and to be very, VERY generous with the basil. To pick a ripe avocado, choose one that has dark skin and is not rock-hard. It should give slightly when you press it with a finger. 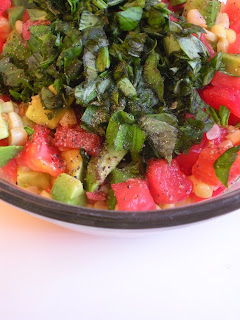 Corn, Avocado and Tomato Salad
The amounts below serve two people as a side dish but I've been known to eat the whole bowl and call it dinner. Serve with crusty bread to sop up the liquids or just drink them up.
1 ear of corn
1 large tomato
1/2 ripe avocado, peeled and pitted
Good handful of fresh basil leaves
1 tbsp olive oil
1 tbsp balsamic vinegar
1) Stand the corn on its end and cut off the kernels with a sharp knife. Microwave the kernels on high for 2 minutes, let cool. If you don't have a microwave you can also boil the corn for 1 minute.
2) While the corn is cooling, dice the avocado and tomato and finely chop the basil. Combine the vegetables and basil in a bowl and season with salt and fresh-ground black pepper.
3) Put the vinegar in a small bowl and drizzle in the oil while whisking. Toss the dressing with the salad and serve.
Mexican Corn
This recipe was inspired by a New York times article on grilled Mexican street corn. Since I don't have a grill I gave it a shot with my oven's broiler. Mayonnaise on corn may sound strange but when doctored up with chili pepper and lime and contrasted against the sweetness of the corn, it's highly addictive - and this is coming from someone who normally does not handle spicy food well at all! Paired with a Corona, this makes the perfect summer snack. 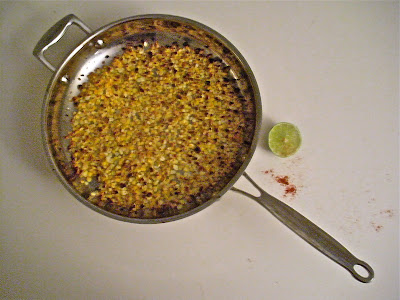 Mexican Corn
If you do have a grill, just mix up the sauce and slather it on the grilled cobs.
For each ear of corn, you will need:
1 tsp oil
1 tbsp mayonnaise
A good squeeze of lime juice
Pinch of cayenne pepper, to taste
1 tsp sour cream (optional)
Pinch of oregano (optional)
Pinch of crumbled feta, goat cheese or Mexican cheese
1) Preheat broiler and set a rack in the middle of the oven. In a bowl, mix the mayonnaise, lime juice, cayenne, sour cream, oregano and cheese.
2) Stand each ear of corn on its end and cut off the kernels with a sharp knife. Spread the kernels in a single layer on a baking sheet or broiler-safe skillet (don't use nonstick!) and toss with the oil.
3) Broil until some of the corn is starting to blister and char. Depending on the strength of your broiler this may take as little as two minutes so check frequently.
4) Mix with the sauce and serve while still hot.
Chinese Chicken and Corn Soup
This recipe comes from a cookbook called "Wok & Stir-fry: Fabulous fast food with Asian flavors" which I bought for $5 from a bargain bin. (I freely admit that scoring good deals on cookbooks fills me with much glee!) The book may have been cheap but every single recipe I've tried from it has been gold. This simple soup uses some common Chinese ingredients such as rice wine and sesame oil. You can leave these out if you don't have them as the main flavors in this dish are those of the chicken and the corn. I love the sweet, mild, subtle taste of this soup but it can also be spiced up with a dash of hot sauce. 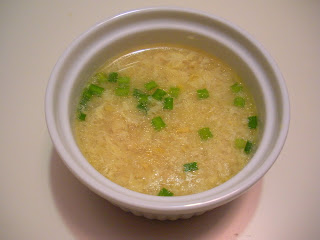 Chinese Chicken and Corn Soup
You can use fresh corn from 3-4 ears of corn instead of canned corn. Puree the kernels from two ears in a food processor or blender to substitute for the creamed corn. Serves 4-6 people.
1 boneless, skinless chicken breast, cubed
2 tsp soy sauce
1 tbsp Chinese rice wine or dry sherry
1 tsp cornstarch
1/4 cup water
1 tsp sesame oil
1 tsp grated fresh ginger
4 cups chicken stock (preferably homemade)
1 15 oz can creamed corn
1 8 oz can corn kernels
2 eggs, beaten
Chopped scallions or chives, to garnish
1) Pulse the chicken 10-12 times in a food processor or blender until ground, but do not overprocess it into a gloppy paste. Mix the chicken with the soy sauce, rice wine or sherry, cornstarch, water and sesame oil and let sit for 15 min.
2) Heat 1 tbsp of neutral oil such as canola or vegetable in a pot over medium heat. Add the ginger and stir-fry for a few seconds. Add the stock, creamed corn and corn kernels.
3) When the soup starts simmering, add the chicken mixture to the wok. Stirring frequently, bring to a boil and cook for 2-3 minutes.
4) Pour the beaten eggs into the soup in a very slow stream, using a fork to stir the surface of the soup in a figure eight pattern at the same time. The eggs should cook into thin, lacy threads. Serve, garnished with scallions or chives.
Posted by Crazy Radishes at 10:00 PM

Email ThisBlogThis!Share to TwitterShare to FacebookShare to Pinterest
Labels: Vegetables