Food for the Turkish Soul: Börek with Potatoes and Feta Cheese 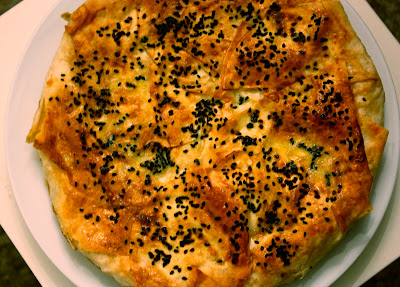 Most Turkish home cooking is deceptively simple. The ingredients are common and cheap but the skilled hands of our mothers and grandmothers elevate them in such a way that the end product is greater than the sum of its parts. Within the vast and varied breadth of Turkish cooking, one of the most cherished dishes is börek. At its core a basic dough of flour and water encasing a savory filling made from the humble potato, spinach or ground beef, börek is fried or baked so that the edges of the dough crisp up and the filling becomes meltingly tender. My favorite part, though, is the sprinkle of nigella seeds on top. You can omit them if you'd like, but to me, their haunting flavor and slight crunch is as essential as the filling and the dough. Nigella seeds can be found at spice stores, Middle Eastern markets and even at some Whole Foods.
Making a good börek requires skill and is thought to be one of the hallmarks of a good cook. If assembled as individual rolls, it also takes time and effort. It is therefore said that if somebody has made you börek, they must care for you a great deal! I learned to make this dish from my aunt, a lady so kind, loving and generous that I'm sure she would make börek for me every day if I asked. I've modified the assembly method so that the dish bakes as a single pie rather than individual rolls. This cuts the prep time down to under an hour.
The key to a proper Turkish börek is to have the appropriate dough. We use a thin, supple dough called yufka. In Turkey, most people buy it in supermarkets, or freshly-made from a tiny neighborhood yufka shop, where it will invariably be sold by a cheerful boy of sixteen with a light dusting of flour over his impeccably white outfit. Outside of Turkey, one can find yufka in middle Eastern stores. It is sometimes sold under its North African names: warka or feuilles de brik. You can make it yourself if you are skilled with a rolling pin, but the store-bought kind works fine when moistened with a little milk and oil. Phyllo is too dry and brittle to make a good substitute. If your yufka is in large sheets, you will need to cut it into triangles which are about eight inches (20 cm) tall.
Börek is great when hot but also good at room temperature and therefore makes a great party and potluck dish. Another advantage to it is that it can be made up to a day ahead of time. Assemble it, then refrigerate, tightly covered with plastic wrap. Bake right before serving. 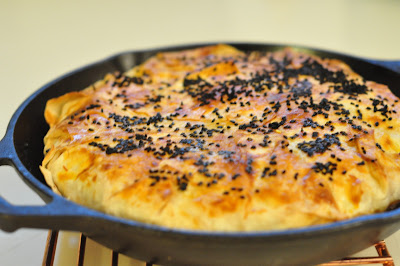 Börek
Börek can have many different fillings. One of my favorite variations keeps the potatoes but replaces the feta cheese with some sauteed onions and ground beef. You can also do an all-potato version spiced up with a combination of any of the following Indian spices sauteed in a spoonful of oil for a few minutes: Whole cumin, mustard seeds, caraway, fennel seeds, nigella, chopped curry leaves. Serves  6-8.
8-10 triangles of yufka
4 medium potatoes, peeled and quartered
2-3 oz (50 g) full-fat feta cheese, roughly crumbled
Pinch of cayenne (optional)
1 egg
4 tbsp milk
6 tbsp vegetable oil
1 egg yolk
Nigella seeds, for decoration (optional)
1. Boil the potatoes in heavily salted water until very tender, 15-20 minutes. Drain.
2. Return the pot to the stove over medium-low heat. Mash the potatoes in the pot, then mix in the feta and cayenne. Season aggressively with black pepper. Taste and add more salt if needed - you want the filling to be pretty salty. Take off the heat and set aside.
3. Preheat the oven to 375F (180C). Butter a round pie plate or 10 inch ovenproof skillet. Beat the egg in a bowl, then whisk in the oil and milk. 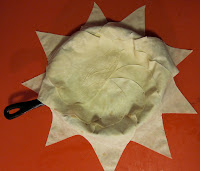 4. Arrange the yufka triangles in the skillet or pie plate as shown in the picture: Put one triangle so that its flat end sits in the middle and the pointed end hangs off the edge. You want at least three inches of overhang as this portion will be folded back over to cover the filling. Repeat with the remaining triangles, overlapping them slightly. Brush the bottom and the sides generously with the milk mixture.
5. Distribute the potatoes evenly over the dough and drizzle on a little of the milk mixture.
6. Starting with the triangle that was put in last, brush the end of each yufka triangle with the milk mixture (this makes it more supple and easier to work with) and fold it over the filling, pressing so that it lies flat. If any part of the yufka seems close to breaking or doesn't want to lie flat, you can brush with more milk and pinch the stubborn bits together. In the end the filling should be completely covered.
7. Beat the egg yolk in a small bowl and dribble in just a few drops of water. Brush it all over the top of the börek and sprinkle on the nigella seeds.
8. Bake for 25-30 minutes, until golden.
Posted by Crazy Radishes at 11:09 PM No comments:

Scrambled eggs are just as ubiquitious a breakfast food in Turkey as they are in the United States. We amp up the nutrition and the flavor in the dish by first softening some onion, green pepper and tomato in butter or oil. This vegetable combo forms the backbone of many Turkish dishes and adds a great savory depth to the eggs. Served with some crusty bread to sop it up, menemen is the perfect choice for a rainy Sunday brunch. If you're in search of comfort food, you can have your chicken soup for the soul - I'll take menemen!
The keys to the success of this dish are to use the thin-fleshed, mild green peppers called Cubanelles rather than bell peppers, and to cook the eggs over low heat so that they are only just set and still moist when served. 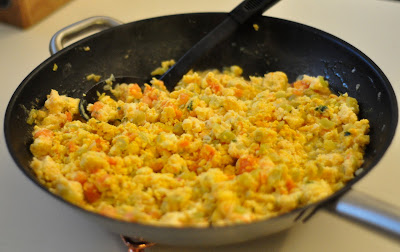 Menemen
I like my menemen to be liquid enough that I can sop it up with some bread, therefore I only cook the tomatoes until they are soft but not yet dry. Non-traditional but delicious add-ins include crumbled feta, a pinch of smoked Spanish paprika or hot pepper. The turmeric in the recipe is not very traditional either, but it gives the menemen a nice, bright yellow color (it won't affect the flavor.) Serves 4.
2 tbsp butter
6 eggs, beaten
1 small onion, diced
2 tomatoes, chopped
1 Cubanelle pepper, seeded and chopped
1 clove garlic, minced
1/2 tbsp chopped fresh thyme, parsley or oregano (optional)
1 pinch turmeric (optional)
1. In a large, preferably cast iron, skillet, melt the butter over medium-low heat. Add the onions and pepper and cook until soft, 5-10 min. Add the garlic and thyme and cook one more minute.
2. Add the tomatoes and cook for a few minutes until soft but still juicy.
3. Season the eggs with salt, pepper and turmeric and add to the pan. Let cook for about ten seconds and then stir continuously to scramble. Take them off the heat soon after they have set.
Posted by Crazy Radishes at 10:09 PM 1 comment:

One of my favorite sayings is: "When the going gets tough, the tough get going." It's a great reminder to be strong in life, to stop complaining, to keep my head high. However, even the tough find themselves in need of a little help sometimes. I recently failed at something I had set my mind on doing and had a pretty lousy evening as a result - the kind of evening where you feel lost, lonely and powerless, where  the phone doesn't ring no matter how much you want it to and the air in the house hangs heavy with silence. If I'd had any sort of musical talent, like this lady here, or this one, I'm sure I could have turned my angst into some killer song lyrics that night. Failing that, I sat around and moped until it occurred to me that I hadn't cooked anything in a long while.
It isn't easy to pinpoint why cooking is, in many ways, my ultimate escape. Sure, there's the thrill of biting into something I've made for the first time and having it taste great, of being in control and knowing how things will turn out. More than those, however, I love the sensory experience of cooking. Just like listening to the high whine of a Supertramp harmonica with my eyes closed, or receiving a big hug from a loved one, something about the sizzle of onions hitting hot oil, the sour lash of lime on my tongue and the powerful aroma of herbs calms me down, fills my chest to bursting with a slow, deep exuberance. By concentrating on cooking, I can forget my silly first world problems, at least for a little while, and leave my house with a smile the next day. In any event, it's hard to be down when the smell of cookies is wafting through your kitchen.


This recipe is from one of my favorite food blogs, Homesick Texan. This blogger's recipes are foolproof and inventive and I love the way she writes with so much passion about the cuisine of her home state. These cookies ingeniously pair the Mexican ingredients of lime and pumpkin seeds (pepitas) and are deliciously light, crumbly and nutty. The tang of the lime juice in the cookies is unexpected but addictive. I can also imagine substituting the pumpkin seeds and lime with other nut-citrus combinations. Hazelnuts and orange or almonds and lemon would be great pairings. 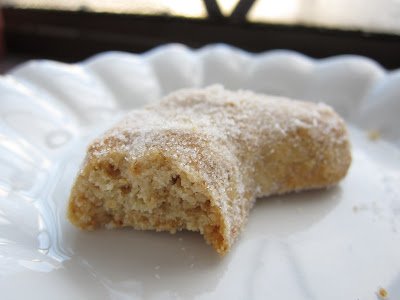 Pumpkin Seed-Lime Cookies
Adapted from here.  My only change to the recipe was to add a bit of roasted coriander seed, which gives the cookies a subtly warm, toasty aftertaste. You can skip the coriander if you'd like. Don't overcream the butter and sugar or your cookies will spread in the oven. I halved the original recipe. This amount makes 15-16 cookies.
3/4 cup (100 g) hulled pumpkin seeds
3/4 tsp coriander seeds (optional)
8 tbsp (1 stick/110 g) room temperature butter, cut into small cubes
1/4 cup (60 g) sugar
1 cup (125 g) flour
1/4 tsp salt
Zest of one lime
Juice from half a lime
1/4 cup powdered sugar
1. If using the coriander, toast it in a dry pan over medium heat for a few minutes, until fragrant. Let cool, then grind.
2. Toast the pumpkin seeds in a dry pan, stirring occasionally, until golden. (Skip this step if your pumpkin seeds are already roasted.) Let cool, then pulse to a coarse powder in the food processor. Don't grind continuously or you will end up with a paste rather than a powder.
3. Put the butter in a medium bowl. Using a fork, incorporate the sugar into the butter.
4. Work the ground pumpkin seeds, flour, salt, coriander and about three quarters of the lime zest into the butter-sugar mixture until it resembles coarse breadcrumbs. Add the lime juice and mix until dough comes together. Cover and chill 30-60 minutes.
5. Roll tablespoon-sized lumps of dough into balls, then roll the balls into 3-inch logs and curl the ends to form crescents. Don't make the crescents too flat. Line cookies on a baking sheet, leaving at least half an inch of space between them, and bake in a preheated 350F (175C) oven for 15 minutes, until slightly golden on top. Let cool on the baking sheet for 10 minutes.
6. Grind the remaining lime zest with the powdered sugar in a food processor. While the cookies are still slightly warm, dip them on both sides into this sugar mixture.
Posted by Crazy Radishes at 7:24 PM 1 comment: