I spent a lovely couple of days in Maine last week. I attended the wedding of a good friend, took a dip in the frigid waters of the Atlantic, and ate almost an entire blueberry pie at Ogunquit Beach. Pie on the beach sounds incongruous, but summer (and the berry-growing season) in New England is so short that I take my pie where I can. Besides, it was pretty darn delicious. I mock incongruity with my plastic fork!  Should you wish to partake in the same experience, read on for my blueberry pie recipe.
The dirty secret, of course, is that summer berries freeze perfectly well. Isn't it nice that you needn't be limited by the seasons to have your blueberry pie? I make mine with frozen berries as these are often cheaper than the fresh kind and taste just as good once they are cooked.
Everyone is always very impressed when you bring a homemade pie to a gathering, but they are not that difficult to make. I've cobbled together a recipe that cuts down the cooking (not counting the baking time) to less than 30 minutes of work. Don't worry that you'll screw it up. I assure you that it will taste great, and even a bad homemade pie is a million times better than any storebought one. 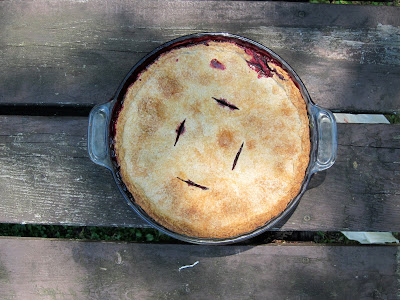 Blueberry Pie
Crust adapted from here, filling from here. Different berries or cherries can be used instead of blueberries. If using other berries, increase or decrease the sugar by a couple of tablespoons according to the sourness of your fruit. No need to defrost frozen berries before cooking. Wax paper makes rolling out the dough a breeze. The secret to rolling is to start in the middle, roll to the end. Lift the pin, return to the middle, then roll in the opposite direction. You can jazz up the filling by adding a couple of pinches of cinnamon, allspice, nutmeg or fresh thyme, but I prefer this plain Jane version.
For the crust:
2 cups (250 g) flour
1 tsp salt
8 tbsp (120 g) melted butter
6 tbsp (75 ml) milk
For the filling:
5 cups (700 g) fresh or frozen blueberries
Grated zest of one lemon
1 tbsp lemon juice
1/2 cup (100 g) sugar
1/4 cup (30 g ) flour
1. Mix 2 cups flour and 1 tsp salt in a big bowl. Mix the butter and milk in a small bowl and add this to the flour mixture. Stir until the dough comes together in one piece. Add a bit more milk if the dough is very crumbly.
2. Butter a 9 inch pie plate. Split the dough in two. Roll out each half between two sheets of wax paper.
3. Preheat oven to 350F. Line the pie plate with one of the dough circles.
4. Combine all the filling ingredients and pour this mixture into the crust.
5. Place the second dough round over the filled pie. Crimp the edges of the bottom and top crusts together and fold them over to prevent the filling from leaking out.
6. Cut a few slits in the top crust to vent the steam. Bake for 50-60 minutes until the crust is browned and the filling is bubbling.
Posted by Crazy Radishes at 9:56 PM No comments:

A Pukka Dinner: Grilled Mussels with a Lemony Herb Vinaigrette

Today, I'd like to talk to you about a man called Jamie Oliver. You may have heard of him. He's a famous British chef known for his simple, ingredient-driven cuisine, his efforts to make school lunches healthier and his numerous restaurants, books and television shows. My first exposure to Oliver came at the age of eighteen, when I stumbled across his BBC show "The Naked Chef". While that name proved to be unnecessarily titillating (Oliver did not, perhaps regrettably, cook in the nude), I was nevertheless captivated by his easy charm, the endless parade of friends through his house, and his frequent use of bewildering Britishisms like "pukka". Just read one of his recipes and you'll see what I mean. Come to think of it, he may be the reason for my weakness for blonds and accents! Girlish daydreams aside, though, I continued watching Oliver's shows for many years because he made cooking seem so practical, easy and fun. In fact, it wouldn't be an exaggeration to say that I started cooking seriously because of him.
Perhaps my favorite of all of Oliver's shows was called Jamie At Home, wherein he picked fresh produce from his bountiful garden and cooked it right on the spot. In one episode that has stuck with me for all these years, he built a fire in a hole in the ground, placed an aluminum pan full of shellfish over it and covered the pan with a bowl to trap the smoke in. Within minutes, the shellfish was cooked. He simply inverted the bowl, tossed in lemon juice, olive oil, chopped herbs and the shellfish, called it salad, and started munching on it where he sat. Until then, I had only ever encountered mussels in stuffy French restaurants, where they are usually served with dainty white wine sauces and tiny forks, and it had never occurred to me that they could so easily be cooked at home, let alone on the grill. It turns out that mussels are perfect for entertaining as they cook very quickly (5 minutes!) and are a cheap (I pay 5$ per bag!) way to have an elegant, fun and interactive dinner.  I've been preparing them simply steamed in white wine for many years, but last week, I finally got the chance to recreate Oliver's recipe. It's every bit as good as I had imagined it would be. Grilled mussels have a wonderful smokiness and make a nice change from hot dogs and hamburgers. I encourage you to give them a try. 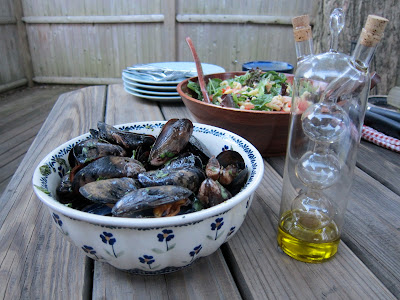 Grilled Mussels with a Lemony Herb Vinaigrette
I prefer using farmed mussels as they have no grit in them and the farming conditions are environmentally sustainable. Covering the grill and using wood chips gives the mussels a nice smoky taste, but both are completely optional. The mussels will cook just as well on an uncovered grill. You can prepare all manner of shellfish in this way - I remember Oliver used a mixture of shrimp, mussels, clams and razor clams. For the herbs, you can use any or all of mint, basil or dill. The shellfish can be cooked ahead of time and chilled before serving. 2 lbs of mussels serve 2 people as a main course or 4 as an appetizer.
2 lbs (1 kg) mussels
Generous handful of chopped fresh herbs
Juice of half a lemon
2 tbsp olive oil
Two handfuls of cedar or hickory wood chips, soaked for 15 minutes (optional)
1. Soak the mussels for a couple of minutes in water. Pull off any stringy protrusions and discard any mussels that are open or cracked.
2. Light your grill. When it's ready, scatter the wood chips (if using) under the grill grate. Put the mussels on the grate in a single layer and cover the grill.
3. The mussels will open when they are cooked, which should take no more than 5-6 minutes. Discard any mussels that haven't opened after this time.
4. Whisk together the lemon juice, olive oil, herbs and salt and pepper, and drizzle this mixture over the mussels. Serve with some bread and a green salad.