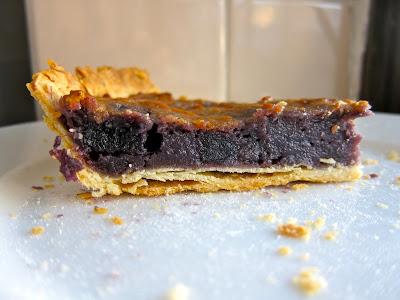 All Thanksgiving related posts here.
My intention today was to take on that Southern classic: Sweet potato pie. I adore sweet potatoes no matter how they are cooked and thought that the pie would be a great addition to the Thanksgiving menu. Yet, when I went to the store, I saw some purple yams on sale and inspiration struck: Why not use these as the filling? I thought the bright purple color would bring a touch of whimsy to the table.
Purple yams are even sweeter than sweet potatoes. When cooked for a long time, their flesh takes on a jammy consistency and an almost caramel taste. My mother hit upon it: They taste exactly like a less sweet version of the chestnut cream used in European and Turkish desserts. The yams are great cut into wedges and roasted at high heat with a bit of oil. You'll be astonished at how delicious they smell while roasting. However, I'm usually too lazy to peel and cut them, so I eat them simply baked and slathered with creme fraiche. The latter, which can be thought of as the less tangy French cousin of sour cream, is an amazing partner for the yams - each has a certain nuttiness that is echoed in the other.
I'm not a fan of sweet potato or pumpkin pies that mask the taste of the vegetable with tons of spices, so I used only a small pinch of nutmeg in this pie. The flavor of the yams comes through bright and clear. The filling was not as brilliantly purple as I would have liked, but the taste of the chestnut-y yams combined with the rich creme fraiche more than made up for it.
Purple yams are available at farmer's markets and many large groceries, but if you cannot get your hands on any, this would be just as good with regular sweet potatoes. Purple sweet potatoes, which are technically a different vegetable than purple yams but taste pretty similar to the latter, would also make a good substitute. 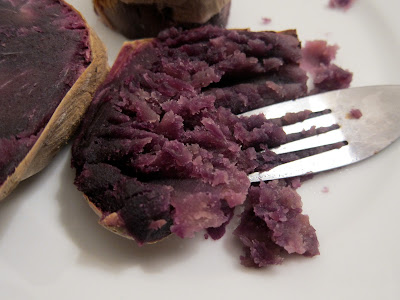 Purple Yam Pie
I find this pie is best if made one day ahead and chilled overnight. The filling is a touch mushy right out of the oven but a night in the fridge firms it up nicely. Make the crust and chill it while the yams bake and cool. Feel free to use your own pie crust recipe instead of the one provided below. For added textural interest, you can sprinkle some chopped pecans into the crust before pouring in the filling. Serve with creme fraiche or whipped cream on the side.
Crust:
1 cup flour
1/4 tsp salt
1/4 cup (60 g / half a stick) melted butter
3 tbsp milk
Filling:
3 medium purple yams
1/4 tsp salt
6 tbsp sugar
Scant 1/4 tsp nutmeg, preferably freshly-grated
1 tbsp butter, cut into small pieces
5 tbsp creme fraiche
2 eggs
1. Bake the yams in a 400F (200C) oven until a sharp knife goes through them the same way it would go through butter. Lower the oven temperature to 350F (175C). Peel, mash and cool the yams.
2. For the crust, mix the flour and salt in a bowl. Mix the butter and milk in a small bowl and add to the flour. Stir until the dough comes together.
3. Gather the dough into a ball with your hands. Roll it out between two sheets of waxed paper. Peel it off the paper and transfer it to a 9 inch pie plate. Chill the dough in the fridge while the yams are baking and cooling.
4. Mix the salt, sugar, nutmeg and creme fraiche into the yams, then beat in the eggs and butter with a mixer until the filling is smooth. Pour the filling into the pie crust. The filling will expand a bit in the oven, so don't fill the crust to the rim. If there is too much filling, you can bake it in a small dish alongside the pie and have it as a pudding.
5. Bake at 350F (175C) for 50 minutes. Check the crust around the 40 minute mark. If it is browning too much, cover it with a little foil.  Let cool completely before serving.

Posted by Crazy Radishes at 3:07 PM